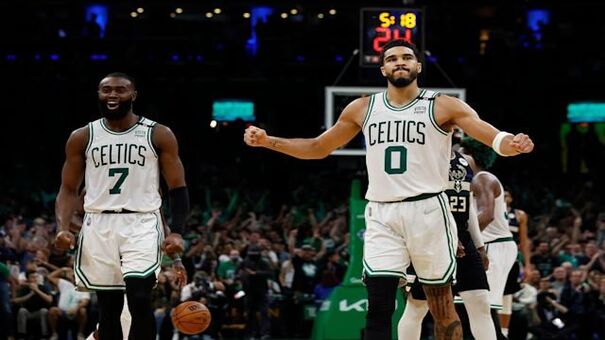 There are few players in the Celtics who can be regarded as weak players. As long as they can ensure that the conduction habits that have been polished for a whole year do not collapse again, then the Celtics should be able to defeat the Heat smoothly, but it is expected that they will have to play 6 to 7 games. , it is possible to decide the winner.

When the Celtics had a 6-point lead from the last 2 minutes in the second round of the G5 home game in the Eastern Division, only to be swallowed by an 11-2 counterattack, what I thought in my mind was: Look. My prediction was right. Especially after the match, when Marcus Smart, who had made two consecutive key mistakes, was reduced to an archery target, he was even more worried that the locker room, which had finally stopped for half the season, might cause another bloodbath. However, in the next two games, the author was amazed, and he should even proudly say that it’s worth it to be beaten in the face.

Jayson Tatum, who always panics at critical moments, and Giannis Antetokounmpo in G6, respectively, scored 46 points, 9 rebounds and 4 assists and 44 points, 20 rebounds and 6 assists, becoming the best in recent years. One of the great star duels, and Tatum also led the Celtics back in Milwaukee. Then in the final game of G7, 2 role players Grant Williams and Payton Pritchard played the role of the Raiders. The former scored a game-high 27 points and made 8 three-pointers; the latter made 3 consecutive shots in the fourth quarter. Recording a three-pointer completely extinguished the arrogance of the Bucks, and finally returned to the Eastern Conference Championship with a difference of 28 points.

In the past six seasons, the Celtics have entered the Eastern Conference Championship four times, but it has been 12 years since the last time they advanced to the finals. This time the opponent is the familiar Heat again. In addition to the old accounts of GAP and LCD in the past, there are also new enemies in the 2020 Bubble Division. It is also interesting to say that the last time the two teams met, it happened when the new crown epidemic was the most serious and countries imposed blockade policies. As a result, the two sides met again in the East Crown, just as countries gradually lifted the blockade.

Except for the rumors that Jimmy Butler and his teammates were arguing in the middle of the season this year, the Heat are all low-key and strong. Even if there are many injured soldiers, there will soon be a newcomer on the top, like a shooter who briefly wore the green shirt. Max Strus, point guard Gabe Vincent, and high-quality toolman Caleb Martin, etc., have also allowed them to enter the playoffs as the leader of the Eastern Division. The Green Shirts are quite different. In the first half of the season, the performance of the Huangqiang has made Double J dismantling or dismantling one of the hottest topics of discussion in all walks of life. As a result, after entering 2022, it is like opening up the two veins of Ren and Du, and it will be a success. The team with the best record in the second half of the season, from the edge of the playoffs all the way back to the second place in the Eastern Conference.

The Heat will have home-court advantage in this series. Compared to the Celtics who were exhausted and exhausted in the second round, the Heat spent 6 games to deal with Joel Embiid’s injured 76ers in the second round. , has an advantage in the consumption of physical strength, but think about it from another angle, after this round of war, the green shirt army is easier to enter the situation with mentality and physical fitness, and it is still expected to overcome the difference between home and away.

Although this year is the first time for Ime Udoka to coach, there are still many Brad Stevens shadows in the offensive and defensive system of the Celtics. The only big difference is the defensive attitude of the main general. Under the coaching of Erik Spoelstra, the Heat have always been a fascinating team. In addition to making a large number of undrafted players and the Ronin shine, he also has a complete and diverse offensive and defensive tactics. Two years ago, almost every scheduling and round of the two sides played a bright spot, which made people even more looking forward to whether the confrontation between the two sides would create a new spark.

The Celtics’ lineup configuration this year makes it difficult for any of the five positions on the field to be named. Point guard Smart is the new division’s best defensive player of the year; Jaylen Brown and Tatum still have some bad habits and flaws in single defense. , but they have the advantage of being skilled and long in stature; Al Horford and Grant in the inside line, although slow in movement, have good defensive concepts and positions; Robert Williams, who is still on the verge of injury, has a pair of long arms Physical monster, the Heat are not as unscrupulous as they were able to play Kemba Walker two years ago this year, raising a big devil named Tyler Herro.

As for the Heat, Herro, Strus and Duncan Robinson, who has never been able to find the right focus this season, will be the best targets for the Celtics, but the worry is that the current singles of the Celtics are mainly around Tatum and Brown. On the body, the lack of a third stable ball-holding attack point may be a hidden concern. In addition, the Heat like to occasionally use defensive tactics such as zone defense, Box and One, etc., the green shirts must adapt to the situation and maintain good conduction habits in order to stabilize. own offensive rhythm.

Butler, who averaged 21.4 points, 5.9 rebounds and 5.6 assists per game in the regular season, shot only 23.3% of his three-pointers, and only made 0.5 shots per game; but after entering the playoffs, Butler’s personal performance improved to In addition to 28.7 points, 7.6 rebounds and 5.4 assists, the three-point shooting rate also increased to 36.4%, averaging 1.6 shots per game. But let’s take a look back. In the Eastern Championship two years ago, Butler averaged only 19 points per game, ranking fourth in the team, but Bam Adebayo (21.8 points), Goran Dragic (20.5 points), Herro (19.2) even more Green shirts have a headache.

Tatum’s most criticism in the past is that every time he has the ball, he only has the basket in his eyes, so that the defense of each team only needs to make him unable to shoot comfortably, but this season, under Udoka’s crazy brainwashing, even if His playmaking ability has not improved enough to be a point forward, but at least he won’t reluctantly shoot. Instead, when the opponent is double-teamed or help is in place, he will pass the ball to the open teammate and destroy the opponent’s formation.

We also used the data of the matchup two years ago. Although Tatum had the highest average of 26.5 points and 6.3 assists per game, his shooting percentage was only 41.3% and his three-point shooting percentage was as low as 41.3%. 30.8%; on the contrary, although Brown scored slightly lower and scored 23.2 points, the double shooting rate was as high as 55.6% and 50%. Although everyone’s eyes are on Tatum, perhaps Brown is the man who can decide the situation of the Eastern Conference this year.

The depth of the lineup and the offensive firepower of the bench should be the biggest difference between the two sides. Although the positioning of the role players of the Celtics is very clear, the points are mainly concentrated on the double third overall. No one can guarantee that Grant and Pritchard can be as full of firepower as the second round of G7 every day. However, the Heat are that everyone can become a shock soldier, and in addition to Herro, the sixth man of the year, on the bench, there is Victor Oladipo, a former star who is still gradually looking for his former skills.

The Celtics have always been good at 3-pointers. The average 39.1 3-pointers per game in the playoffs is second only to the Lone Ranger’s 40.3, and the 37% shooting rate also ranks fifth in the playoffs. Interestingly, the Bucks made 44.8% of their opponent’s shots in the regular season this year from beyond the three-point line, which is the second-highest team in the league. As for who is No. 1? The result was actually 48.6% of the Heat. Although the Heat can limit the opponent’s three-point shooting percentage to only 33.2% in the playoffs, when facing the shooting team that uses three-pointers as the main weapon, it cannot be ruled out that the Celtics will make more accurate shots and pay more. Painful price.

The Heat’s home record, whether in the regular season (29-12) or the playoffs (6-0), is the best team in the Eastern Conference this year, and in the six home games in the playoffs, the average net The winning score is as high as 17 points, and even only 2 games have allowed the opponent to score 100 points. However, the Green Shirts are not a fuel-efficient light. They have a 4-1 away record in the playoffs, which shows that their mentality and execution are enough to cope with the noise of the away fans.

Whether it is offense or defense, this round of series is worth watching with your eyes wide open. However, there are few players who can be regarded as weak players on the account of the green shirts. As long as you can ensure that you can polish the transmission habits for a whole year and do not collapse again , then the Celtics should be able to defeat the Heat smoothly, but considering Spoelstra’s adaptability and the experience of the Heat players, it also adds a lot of uncertainty to this series, no matter who the final winner is, I believe it will be a 6-7 game top duel.