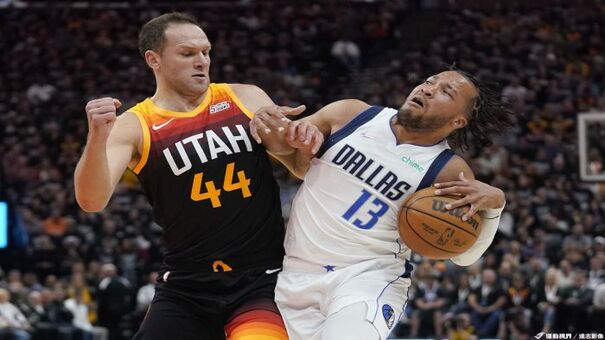 The Dallas Mavericks, as I had predicted, beat the Utah Jazz 4-2 in the first round and reached the Western Conference semifinals after 11 years. To a certain extent, the qualitative change of the Mavericks has been called a successful realization. As for the fulfillment, can it be amazing? as always, just watch the second round of the series with me to find out!

Before the playoffs kicked off, I spent some space discussing the Dallas Mavericks this season’s Quality change, can it be realized? Now, as I predicted, the team beat the Utah Jazz 4-2 in the first round and made it to the Western Conference semifinals after 11 years. To a certain extent, the qualitative change of the Mavericks has been called a successful realization, I think. As for the fulfillment, can it be amazing? as always, just watch the second round of the series with me to find out!

Surprise or surprise, Jalen Brunson, a player who had hardly appeared in the media in the past, was able to emerge in the playoffs and became a topic talked about by various senior football commentators and well-known media. With the Mavericks face Luka Doncic absent, Jalen Brunson carried the entire team on one shoulder and handed in 24 points, 7 rebounds, 5 assists, 41 points, 8 rebounds, 5 assists in the first three games of the series. , 0 turnovers!, 31 points, 6 assists transcript, allowing the Mavericks to welcome the return of ace Luka Doncic with a 2-1 advantage and get rid of the curse of the first round of the playoffs. The series averaged 27.8 points, 4.8 rebounds, 4.2 assists, and 0.7 turnovers. Jalen Brunson’s importance to the Mavericks has long been self-evident.

Secretly tell you a secret. After the first round of the playoffs, the player with the most total points is not the league scoring champion Joel Embiid, not last year’s most valuable player Nikola Jokic, nor is it Kevin Durant who was swept out early. , but the 6-foot-1 Undersized guard that didn’t start until the fourth year of his career—Jalen Brunson.

He doesn’t have Stephen Curry’s ability to shoot 3-pointers in a multi-player matchup, and he doesn’t have Ja Morant’s physical ability to pull the bar and hit the rim when he’s in the air, but he has a solid, textbook quality. Basic skills: Fluent change of direction and crotch dribble to attack the defender’s center of gravity, cunning Hesitation Move to destroy the defender’s rhythm, delicate shoulder swing and head swing to break the defender’s mind, Old-School’s footwork to shake off the defender, and finally Pocket two points with the not-so-flashy but lethal turnaround jumper or Giant Killer. Jalen Brunson’s Short Mid-Range Game is exactly what the Jazz dream of using Drop Coverage as their primary defensive strategy.

However, entering the Western Conference semifinals, the Dallas Mavericks will face the Phoenix Suns with more adequate flank defense and a more complete team defensive physique. To be honest, I think Jalen Brunson’s performance will be somewhat suppressed. how do I say this? In Game 4 of the first-round series, facing the 6-foot-7 Bojan Bogdanovic, who was not known for his defense at the end of his career, he obviously played extremely hard on the offensive end, and his overall performance was not ideal. Just imagine, if the Suns decide to play a flanker with Mikal Bridges against Jalen Brunson, it would be almost impossible for him to replicate his first-round performance intact.

Entering the analysis of the Western Conference semifinals, I would like to discuss the Dallas Mavericks-Phoenix Suns series from two levels: Strategy Application and Lineup Configuration.

Looking at the defensive strategies of the Mavericks and Suns from the game content and regular season data, it is obvious that both sides are quite willing to let their opponents shoot in the In The Paint (Non-RA) and Mid-Range areas. In other words, in the face of conduction from beyond the three-point line, the two teams can always actively close out after the defensive rotation to disrupt the shooter’s shooting rhythm, forcing the opponent to drop the ball and shoot Contested Jumper in the middle distance. Speaking of which, you can bring out the first advantage of the Suns – Mid-Range Game.

The Suns are a well-known +2 +2 army in the league. Chris Paul’s mid-range jumper has already reached the level of perfection, Devin Booker’s mid-range singles is quite Kobe Bryant’s style, Mikal Bridges is just practical. Mid-range offense and Deandre Ayton’s shooting ability can’t be ignored either. In short, almost everyone of the Suns starters can beg for a living in the mid-range. On the other hand, the Mavericks, except for Jalen Brunson who is happy to beg for food in the mid-range, Luka Doncic, Spencer Dinwiddie and others (I won’t talk about the 3D with limited ability to play the ball. ) prefers to hit the rim and challenge the restricted area. Of course, such a choice is not necessarily a bad thing, but the judging scale of the playoffs allows the defensive end to give offensive players more physical contact. It may not be a wise move to challenge the rim protection ability of Deandre Ayton and JaVale McGee.

After talking about defensive strategies and their implications, and cutting into the series on offense, I’d say it’s a screen quality battle. Whether it’s the Mavericks led by Luka Doncic or the Suns led by Chris Paul, the running of the halfcourt battle between the two sides is mostly started by the high pick-and-roll. Once the pace of the series is slowed down, the screen quality of Dwight Powell and Deandre Ayton will determine who has the upper hand, because only through high-quality screens that create a little bit of separation for the ball carrier will there be a chance. Tear apart the league’s leading team defense ability and become the active side in the brilliant offensive and defensive battles.

Frankly speaking, the Phoenix Suns roster is far more complete than the Utah Jazz. Chris Paul’s strategy, Devin Booker’s beautiful singles, Deandre Ayton’s bullying in the paint, the Dallas Mavericks no longer need to block Donovan Mitchell as they did in the first round of the series (after all, he won’t give the ball to the falling Rudy. Gobert). All three of the above can score points in a one-on-one situation, do not stick to the ball even if they are double-teamed, make correct passing choices, and believe that teammates can score the ball in a local four-on-three situation. frame. The Mavericks’ defense will be challenged at a completely different level.

To keep the Suns from scoring, Dorian Finney-Smith has to hold on to Devin Booker, Reggie Bullock has to give Chris Paul a tough first-line pressure, and Luka Doncic, Jalen Brunson, and Dwight Powell have to help and force the ball. Penalty, and early rotation to the neutral shooter Closeout, and finally worked hard to consolidate the defensive rebound. As long as one part of the above process is not implemented in place, the Suns, known as the +2 +2 army, will never 5 4 3 with you.

Furthermore, if you carefully review the Mavericks-Jazz Game 6, you can find that the lineup that took away the rhythm of the game was the Death Five consisting of Jalen Brunson, Luka Doncic, Spencer Dinwiddie, Reggie Bullock, and Dorian Finney-Smith. This lineup relies on high-quality cut passes and outside grasp, so that Rudy Gobert does not know whether to protect the rim or defend the three-point shooter, completely destroying the tragic defense of the Jazz. But the Phoenix Suns are fully capable of dealing with this set of dead five. After all, Mikal Bridges’ first-line pressing quality is quite good (even from No. 1 to No. 4), Deandre Ayton’s light lateral footwork and over 7’5 wingspan allow him to interfere with defenders’ shots, 6’5 Devin Booker at 6-foot-6 and Jae Crowder at 6-foot-6 can easily switch to any Mavericks player, and Chris Paul’s defensive intelligence is there, as long as he can avoid being called by Luka Doncic, basically not on the defensive end. underdog. I’m curious about what magic Mavericks head coach Jason Kidd will use against the league leader (maybe Boban Marjanovic, who has been hiding for a whole season?), and a surprise victory at a near-absolute disadvantage!

Since Luka Doncic stepped into the NBA, the Dallas Mavericks have a record of 3 wins and 11 losses against the Phoenix Suns (recently suffering a 9-game losing streak), and they are almost completely out of touch with this team. Judging from the situation against this season, the Mavericks are also in a dilemma of 0 wins and 3 losses. But is there any reference value for these three battles? In fact, it’s not always the case. After all, these three battles happened before the trade deadline. That is, the era when everyone watched Kristaps Porzingis play Jae Crowder in the low post and failed, but instead was intercepted and quickly defended and counterattacked (how does it feel very long). You know, the Dallas Mavericks after the trade deadline are one of the hottest teams in the league. Moreover, Luka Doncic also has the Buff blessing in the playoffs, I believe that the whole series will still be inseparable.

Rationally predicting the trend of this series, I think the Phoenix Solar will make it to the Western Conference finals with a series score of 4-2. Emotionally, I hope that the Dallas Mavericks can knock out the league leader 4-3, hit the Western Conference Championship, and become the biggest dark horse this year! But whatever the outcome, the 2021-22 season is definitely going to be a successful season for the Mavericks.