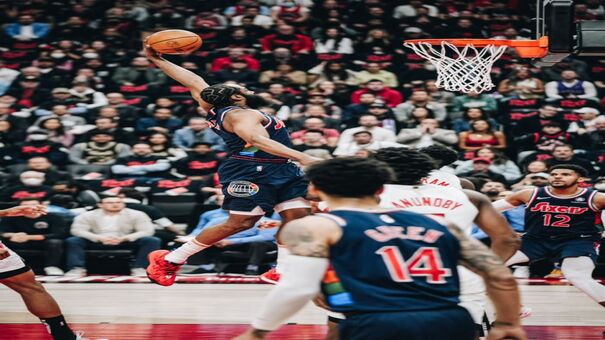 From James Harden in the first quarter, Danny Green in the second quarter, Tyrese Maxey in the third quarter, and Joel Embiid in the last quarter, the 76ers maintained a fairly average rhythm, with a rhythm of someone jumping out in every quarter.

The T-Rex’s defensive end adopts a 3-2 zone defense to ensure that when the opponent may launch an outside shooting offensive, they can defend quickly. They are also betting that the fluidity of the 76ers’ ball is as rigid as the first two games. Unexpectedly, Harden’s first quarter He scored 10 points in the penalty area, contrary to the previous fatigue, and strongly demonstrated the star’s ability. This allowed the Raptors to refocus on him, but also paid the price of letting him pass 5 assists.

However, in the second quarter, the Tyrannosaurus quickly made a counterattack of 11:0 and regained the lead. Even if the whistle in the first quarter was not on their side, the tenacity was still the same, especially Chris Boucher, who started from the bench, was quite active in this quarter. , coupled with Pascal Siakam’s repeated shots and cuts, the two contributed 27 points together, and Boucher even had a ball to steal Harden’s ball.

However, the 76ers had another player who jumped out in the second quarter, and that was Danny Green, who didn’t shoot in the first quarter and shot 4-for-6 from the outside in the second quarter. In the past, I often saw Harden cut in and pass the bottom corner to give him a three-pointer. Even G4 and G5 sometimes made me feel too obsessed with this combination. The offense lacked the performance of other people, and the overall appearance was very monotonous, but today This time is very different. Even if Danny only scores in this quarter, it’s not a big deal when he’s no longer the 76ers’ most-wanted offensive option when they’re down.

Coincidentally, in the third quarter, the 76ers ushered in the outbreak of Tyrese Maxey. They quenched the arrogance of the Tyranny’s counterattack with unreasonable three-pointers several times. Their zone defense in this quarter was changed from 2-3 in the first half. 2-1-2. In addition to effectively limiting the offense inside the 3-point line, Maxey made 3 of 5 three-pointers and had 4 free throws, and the speed of his shots was very fast, not the kind of empty-handed running. The chance to get out for a long time is almost always the kind that pulls it out at a 45-degree angle, which is quite fatal. The Tyrannosaurus began to fall further behind in this quarter, and once played a 17-0 offensive in the middle and late third quarter.

It is said that Harden likes to take fouls. However, he only got 6 free throws in this game. He scored 22 points and 15 assists in the game. He also had a certain output while connecting the whole team. After Joel Emidd took over in the fourth quarter, the 76ers finally Withstood the pressure, at this rhythm of someone jumps out in every quarter, he broke the possible reversal spell of head coach Doc Rivers, and advanced to the second round 4:2.

If the 76ers are in this state in every game, their dominance will still be enough. Of course, whoever has the best temperament in the playoffs is more about the ability to self-adjust. Siakam can’t say that in the fourth quarter. Repeatedly unsuccessful cuts are war criminals. When the Tyrannosaurus faced the unfavorable whistle and the good state of the 76ers in the fourth quarter, it was the most important thing to regain the offensive and defensive state of the second quarter, but the whole second half seemed to collapse little by little. In general, no one can jump out to change something, and the defense is completely out of balance. As soon as Embiid grabs the ball at the free throw line, the four people retract, Embiid passes the bottom corner, and the T-Rex defender jumps out and jumps out of bounds, defending. The whole thing was out of tune, so naturally, the 76ers could only watch the 76ers go away. It’s a pity, even though it was already very difficult for them to tie the series, this game is not without a chance.

In the end, the 76ers will meet the first in the Eastern Conference in the second round. The Heat, who have more experience in the playoffs, can’t help but wonder if they can compete with teams with higher team strength? They have to make sure that their mentality does not explode, and every game has the fluency and enthusiasm of this game. They may not be able to stand out in the audience, but it is the most ideal state to have someone jumping out in every quarter. Congratulations to the 76ers, and blessings to the Tyrannosaurus.