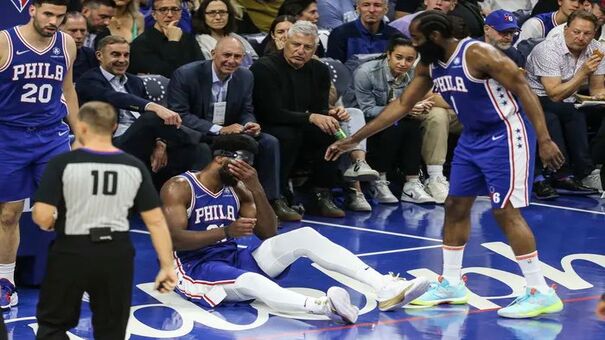 Jimmy Butler is considered the MVP of this series, and all the data are the best in the team. What is even more commendable is that he still has to roam from No. 1 to No. 5 in this round. Affecting his performance, he can even deliver high-end performance in every link.

The first five games of this series were all won by the home team, but the 76ers who returned to the battle did not continue this practice. Under the pressure of the last battle, the 76ers failed to rebound from the bottom. In the second half, they fell behind by 20 points, which also set the tone for the victory and defeat earlier, and the Heat closed the door successfully and obtained tickets to advance to the Eastern Conference Championship.

Can both limit Embiid and reduce fouls What defensive strategy does the Heat come up with?

Continuing the successful experience of restricting Joel Embiid in G5, the Heat still adopted a similar regional defense strategy in this game. The accumulation of a large number of penalty areas made it difficult for him to hold the ball in the interior. Even if he cuts from a high position, he will face many obstacles and double teams. As shown in the video below, Embiid cuts with the ball from a high post, and the Heat immediately double-teams him, forcing him to move to the baseline, and finally tries to pass a big diagonal corner, but an out-of-bounds error occurs.

Facing the Heat’s zone defense, it not only effectively slowed Embiid’s destructive power in the penalty area, but also forced him to add more shots from the outside. Nearly half of Embiid’s shots in this battle were distributed outside the penalty area, and his 8 three-pointers made a new high this season. (Including the regular season and playoffs), but he seems to be affected by a torn ligament in his right thumb, and his projection trajectory is seriously deviated. In this battle, he shot only 2 of 11 from the mid-range and beyond the arc.

When Embiid first came back in this series, he did bring a lot of threat to the Heat. For example, G4 caused all the Heat’s long crowd to get into foul trouble, and had to put up a five-small formation to help the team win two consecutive victories to tie the game.

However, the Heat immediately made adjustments, using more help defense and double-teaming to reduce Embiid’s chances of holding the ball in the penalty area. Embiid averaged 9.8 low-post singles per game in the regular season, ranking second in the league, but G5 and G6 only allowed him to get 3 low-post singles chances. What is even more admirable is that the Heat can effectively control the fouls while effectively reducing his penalty area score. The Heat G3 and G4 were taken to the free throw line 23 times by Embiid, but G5 and G4 G6 only allowed him to get 7 free throws.

Why is Harden always hidden in the second half?

The 76ers’ defeat in this game has a lot to do with James Harden. Harden made 4 of 7 shots in the first half and scored 11 points, helping the team to close the one-point gap, but in the second half, he made 2 shots and did not score any points. The team fell into a 20-point deficit at one point. It is not the first time that the phenomenon of disappearance in the second half like this battle has occurred. Harden’s performance in the second half of this round of series is always different. In the first two quarters, he scored an average of 12.8 points and made 46% of his three-pointers. In the last two quarters, he averaged only 5.3 points and shot 25 percent from three.

Due to the Heat’s targeted defense consumption, Harden often spends a lot of physical strength in the first half, which may be one of the reasons for the disappearance in the second half, but the main reason may be Harden’s self-sufficient mentality. Since the trade to the 76ers in mid-February, He positioned himself as the second brother of the team, and believed that he only needed to contribute to the output of the second-leading level, which led to a decline in his aggression. Taking this battle as an example, he only made one cut in the second half. As a control group, Tyrese Maxey With four cuts to the rim, Harden’s ambition seems to be lacking.

However, Harden’s performance is not as good as expected and cannot be entirely blamed on the individual. The coaching team may also be responsible to a considerable extent, especially when it comes to the tug-of-war in the second half, Embiid often comes to the top of the arc to play with the ball, and Harden has no ball. It can only be reduced to a situation of waiting for the ball shooter, and the coaching team has not really created a system that can complement each other.

Unquestionable series MVP stats look at how comprehensive Butler is

Jimmy Butler was named the MVP of this series, averaging 27.5 points, 7.5 rebounds, 5.5 assists and 1.7 interceptions per game. All the data are the best of the team. What is even more commendable is that he must also play from No. 1 to No. 5 in this round. In the meantime, he has to bear a larger workload, but it does not affect his performance in the slightest, and he can even deliver high-end performance in every link.

According to Basketball-Reference.com, Butler has played about 41 percent of his postseason minutes as an inside player, more than he has in any regular season, which also gives him a rebounding percentage (TRB%) of 12.3 percent. , wrote a career high in the playoffs.

In addition, due to Kyle Lowry’s left hamstring injury and missing most of the series, Butler was often the team’s actual offensive engine, but his turnover frequency did not skyrocket, and his assist-to-turnover ratio still reached a dazzling 2.75. Thoroughly compared to the opposing camp’s Harden (assist-to-turnover ratio 1.45).

As for his main occupation – scoring, he still maintains a high level of output. Compared with the regular season, in addition to the increase in the score on the books, his grasp has also been significantly improved, especially in the penalty area between the waiver area and the free throw line. Hit rate increased by about 30%.

Synonymous with the best green leaves, the up-and-coming Max Strus

United together is probably the best portrayal of the Heat in this round of the series. With the starting point guard Lowry out due to injury, not only Butler took the lead in the charge, other teammates also made timely contributions. The most notable green leaf in the Heat’s performance this round is swingman Max Strus. Following G5’s 19 points and 10 rebounds, the first double ten in his playoff career, he had 20 points, 11 rebounds and 5 assists in this battle.

Perhaps the most astonishing thing about him in this battle is not to advance his personal scoring record again, but that his assists and offensive rebounds are second on the team. He can serve as a pick-and-roll ball carrier in the game, and he can also make a tip-up in the air. In the regular season, these two offensive modes only account for 12% of all his personal offensive frequency, which is obviously not what he usually does on the court. That’s why it’s such a surprise when he behaves like this.

It can also be seen from the game that Strus has a good ability to interpret defenses. Take the Heat’s signature Chicago Action tactic as an example, that is, the continuous use of Pindowns and Dribble Handoffs to create a gap for the shooter. Strus can find the position of the defender. Teammate’s gap, as in the video below, Strus attracts two defenders at the same time after holding the ball through the screen, but the team defense of the 76ers did not rotate in time, Strus pierced the ball with one arrow, and Dewayne Dedmon, who had a slump in assists, dunked Score.

Although Strus is positioned as a shooter, his function is not only that, he is better than Duncan Robinson, which may be one of the reasons for the marginalization of the latter role this year.

After six fierce battles, move on to the next goal

After the end of G6, it also represents the end of this round of the series, and the two teams are about to move towards the next goal. The Heat’s first task is undoubtedly to prepare for the Eastern Conference Championship, and seek to enter the championship after 2020. The 76ers have to think hard about Harden’s contract extension, as well as the adjustment of the player lineup and even the coaching staff, looking forward to the next season.