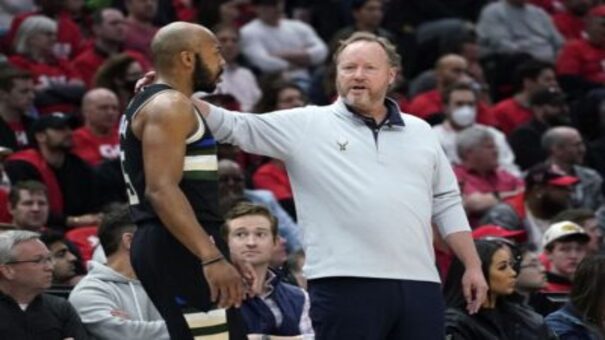 Unsurprisingly one-sided, even though the Bulls were chasing the big deficit to single digits in the third quarter, the experienced Bucks were always able to hold their ground, relying on Giannis and Jrue Holiday to quickly counterattack, and the Bulls took the lead. Grayson Allen’s 80 percent shooting from the perimeter was useless, trailing 3-1 in the series.

Continuing the evolution of the previous game, Mike Budenholzer continued to try more flexible scheduling in G4. He made two three-pointers in the beginning of Jrue Holiday, with about 7 minutes and 30 seconds left in the first quarter, replaced by Jevon Carter , the time is a little early, and Holiday is in good condition, it should be safer to stay a little longer, especially when the ratio between the two sides is 11:10, the author was also confused about this scheduling at the beginning, and gradually understood as the game progressed.

I want to more accurately allocate the physical strength of players in the 8-player rotation.

Whether it’s Giannis-based majors and minors, Holiday with LP Twin Towers, or Holiday and Giannis in a group with Grayson Allen, Jevon Carter and Pat Connaughton in turn, although he still maintains 8 people in this schedule, but The frequency is more frequent and the variability is more, it is obvious that he wants to deploy more possibilities in this easy game.

Giannis Antetokounmpo has once again become a nightmare for the bulls. It’s not just the bulls that no one can really restrain him. To put it more boldly, this season, he is no longer able to cut most of his strength by putting on a wall, he only knows how to commit suicide. The cut-in Mother Wu Xia. He has a better sense of space on the court, a more consistent individual shot has been developed, and he is more proficient in rhythm control on offense, when you can hardly predict his next move, or even if you can predict it, because of the overall strength When the improvement of the prediction makes the prediction much more difficult, you will find that he is really transforming.

If it was last season, the Bucks were able to make a makeover or even win the championship because the backcourt engine was upgraded from Eric Bledsoe to Jrue Holiday. I would say, yes, at least half of them were indeed affected by this.

Speaking a little earlier, if the Bucks can create new achievements this season, then at least, Giannis’ changes cannot be ignored. Compared with the past, his actual playing style on the field is a visible improvement to the naked eye. At the same time, Giannis’ record of at least 30 points, 10 rebounds and 5 assists in the playoffs accumulated 12 games, surpassing Charles Barkley and Russell Westbrook’s 11 games each, and rising to third in history, behind Larry Bird with 19 games, and LeBron James in 48 games.

The Bulls had some bright spots in this game, with more people coming off the bench to help, including Ayo Dosunmu, who hit a streak of corner 3s at one point, and Javonte Green, who played aggressively in the third quarter, even if it was because of Alex Caruso. The changes that occurred after the injury, but the content of the game developed is actually not bad.

I mentioned earlier that the Bulls absolutely need DeMar DeRozan or Zach LaVine to break out if they want to hold the home court. Looking at the whole game, at best, it can only be said that the latter has an ideal feedback. After all, 24 points and 13 assists, and the first three games. In comparison, LaVine has more offense off the rim to help offload. It’s no longer just his pattern of taking turns ending offense with DeRozan and Nikola Vucevic. Of course, he can also hope for more points, but when the two are in the same league. There is a certain gap in the team’s experience. When you are behind for most of the game, you don’t want to see the main team’s brain-rushing handling of the ball. relatively rational.

What is difficult for DeRozan to replicate is not just the explosiveness of G2, but what is more certain is that he does not have the ability to replicate the regular season performance in this series. After four games, he averaged 23 points per game, 6.25 points per game, and he didn’t make any three-pointers. In the last game, he didn’t even make outside shots. He averaged 21.25 shots per game and 8.5 goals per game. The overall hit rate was 40%. , what about the regular season?

Even if the whole world understands that the intensity of the playoffs will make the data of the regular season to be revised down, and the process of this revision will be synchronized between the two teams (the magnitude is not necessarily), but the point is that the personal data of the main bulls will decrease. When the repair range is already very large, has the lower repair part been transferred to other teammates? Or on the other hand, do teammates have the ability to help clear the siege? Does the coaching team have any relevant configuration and planning?

He scored 20 points and 10 rebounds today, and the last game was 1 point and 4 rebounds. The player was named Patrick Williams. I can’t help but feel sorry for him. If there was a similar contribution earlier, wouldn’t the situation be so one-sided? After all, he’s only a sophomore, so maybe he can grow up and become a solid offensive player like Bobby Portis. Looking at Grayson Allen, who made 6 of 7 three-pointers, 10 of 12 from the field, and scored 27 points with 83 percent shooting, I believe he will have a lot of inspiration for Coby White.

Saying there’s one more game is not disrespectful to the Bulls, it’s just that after four battles, all the moves that can be made are probably finished. The Bucks who have drawn cards can now handle this series more calmly. For the Bulls, This is only the first season of the current lineup, and the timeline may have to be pushed back a little to see a better view.

The $1.25 billion MGM Las Vegas has the same grand ambiance as the MGM Grand Las Vegas, but with a gorgeous oriental twist.

The Venetian Macao Casino Hotel, built at a huge cost, provides visitors with a casino experience in an exotic location.

Compared to Embiid’s strong comeback in G3, this game was Eric Spoelstra’s answer after his first encounter with the Twins, and he did.

Is bingoplus a scam?

Can I withdraw my money from bingoplus? Is bingoplus a scam?
Do you recommend bingoplus? Are there many promotions at bingoplus online casino?