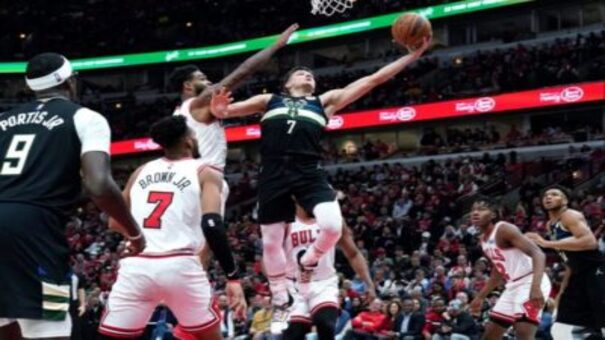 The Bucks started with a three-tower lineup of Giannis Antetokounmpo, Brook Lopez, and Bobby Portis, and the change was tantamount to giving the Bulls a chance to hit the bench, but in the middle of the first quarter, Grayson Allen and Pat Connaughton combined to score 12 points from the outside. The former made three consecutive three-pointers in just two minutes. Suddenly, the big and four small lineups led by Giannis at this stage also made the Bulls exhausted on the defensive end, which is equal to the starting and backup of the Bucks. Neither let the bulls get a bargain.

After changing the problem of repeated mistakes in the first two games, the Bucks made only 2 mistakes in the first half and 9 mistakes in the whole game. In the first half, they were able to pull out a substantial lead of 19 points. It is really a difference in concentration, even if the so-called concentration is heard. It looks very ethereal, and even makes people doubt how unfocused the defending army can be? But as long as there are fans of the match, it is really not difficult to see how the Bucks’ state of the first two battles has dropped. For the defending champions, the difficulty has always been to maintain the same intensity as the championship season. It is difficult to start from scratch, and it is even more difficult to keep improving.

The Bulls are in some kind of trouble on the offensive end. Even if the Bucks’ matchup defense is solid, the three towers in the starting change do add a barrier to the penalty area, but that doesn’t mean the Bulls can’t punish their opponents on the perimeter. Nikola Vucevic is 9 shots from the outside. 3, which is in line with his own level this season, even if this is not his best attacking method, but after all, he has cooperated with the team to make such adjustments for a whole season, so 9 shots from the outside are very reasonable in this game.

On the other hand, Zach LaVine and DeMar DeRozan, after the former made 2 of 4 shots, the remaining 9 shots were from within the three-point line, and the number of attacks to the rim was much less than in the first game, and perhaps most of the opportunities were handed over in the second game. To DeRozan and winning the game gave him reason to believe it was the right move, but this is a rare one, DeRozan’s shot count plummeted from 25 and 31 in G1 and G2 to 11 in this game, even in this game. The Bulls chose to give up the fourth quarter to adjust the main player’s physical strength. DeRozan also made 19 and 21 shots in the three quarters of the first two games, and he did not make a single shot from the outside. Should we say that the offensive desire is poor? It’s more of a situation created by the Bulls’ failure to increase their perimeter offense.

In theory, putting Bobby Portis in the starting lineup would reduce the Bucks’ bench depth. Before the Bulls gave up the fourth quarter, the Bucks only had an 8-man rotation. In other words, there was no battle strength due to Khris Middleton’s absence. Slippages or situations that require more people to jump out, at least for the Bucks in this case, don’t require more rotations to deal with. Grayson Allen was undoubtedly the best player in the entire game. He opened fire in the first quarter and did a great job on the defensive end. At the same time, when no one on the bench was able to match the performance of the Bulls, the gap between the back and forth was also The burden of the main force of the Bulls has deepened, and the game has gradually moved towards a situation of lack of success.

After finally winning on the road, he turned around and suffered a 30-point defeat at home, which greatly damaged his morale. The individual performances of LaVine and DeRozan need to be more explosive to drive this team. The Bucks must maintain their focus on this game, and not repeat the mistakes of the previous two games. It is only the third game. Both sides have their own homework. Yes, the author is very satisfied with the performance of the Bucks in this game, but this is only the first round. If the Bucks want to go a long way in defending their title, they really have to be more cautious.

For the Bulls, the embarrassing point is that hitting the playoffs is the goal of the season, but just in terms of these three battles, it will be found that the Bulls’ routines are very similar, and each team’s routines actually have their own. Trajectories, similarity is not really a big problem, but the possibility of lack of flexibility in these similars.

The same three main players are the core. The Bucks actually have experienced elders like Brook Lopez and Bobby Portis sitting on the bench. There is even Serge Ibaka on the bench. Even if they are not in the main rotation, they are just on the list. Insurance, only Tristan Thompson has a similar weight in the Bulls. Coby White is very good, and he can provide stable firepower at the same time, but other than that, the functionality of other Bulls bench players is not obvious in which aspect, plus Starter Patrick Williams isn’t stable yet, and it’s just too hard to be without Lonzo Ball.

Maybe the Bucks will do the same without Jrue Holiday, but the lack of Middleton has made adjustments in a short period of time, and the Bulls have been without Lonzo Ball for three months and seem to have nothing but to start Alex Caruso. Better options for more flexible changes. Then, the Bulls’ lineup is bound to have to be reinforced in the off-season, and there may be more adjustments to the play style. This involves the layout of the team and other extended plans. It is not within my scope of defense, and can only be said in the long-term. Look, the Bulls have to do, there is really a lot.

Emperor Entertainment Hotel is a six-story casino that offers a variety of Chinese and Western entertainment games.

Whether or not the final kill ends Philly’s playoff run, the team’s turmoil and lack of concentration make Butler unbearable in this environment.

Can I withdraw my money from BetVisa? Is BetVisa a scam?
Do you recommend BetVisa? Are there many promotions at BetVisa online casino?

Is nuebe a scam?

Can I withdraw my money from nuebe? Is nuebe a scam?
Do you recommend nuebe? Are there many promotions at nuebe online casino?