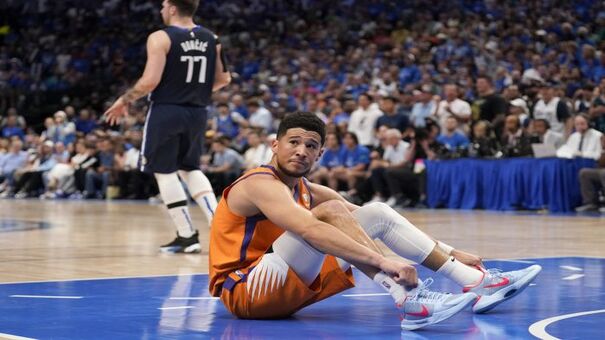 Aside from the whistle, after the battle moved to Dallas, Luka Doncic waited for the support of his teammates, and the Suns lost the lead of Chris Paul, the main controller.

If you look at the results of the game and the performance of the players, for the Suns, the last two games in Dallas in the second round are completely different from the previous two games, and the situation has completely changed. The first two games were smooth sailing for the Suns. The Suns maintained their advantage in the first game, only to be chased by the Mavericks at the end of the fourth quarter. In the second game, the rhythm of the whistle was fragmented. The Suns were still able to rely on the dual-core Devin Booker and Chris Paul in the backcourt in the second half. Demonstrated dominance and took away the game, but in the third and fourth games, the Suns fell behind in the first quarter, and the entire game had been chasing after unsuccessfully, eventually allowing the Mavericks to tie the series two games in a row.

What’s even worse is that CP3’s performance is completely inferior to the standard. He had just passed his 37th birthday before the third game. After turning 37 years old, he could only say that he was sloppy in the two games, with 12 points and 7 rebounds in the third game. , 4 assists but up to 7 turnovers, and he has only 13 turnovers in the first 8 playoff games this year. In the fourth game, there were only 5 points, 5 rebounds, and 7 assists in the case of foul trouble. Although it dropped to 2 turnovers, he left the game with 6 fouls. This is only the fourth time he has fouled out in 139 playoff games in his career, and it is also the first time in his career that he has swallowed four fouls in the first half.

CP3 was indeed not a clean player in the past, and the label for his constant small moves has existed for many years, but he has always been a player who can master the scale. In his 17 years of career, even nine seasons have not been full of fouls, and The league is not so clean that any small moves are not allowed. The CP3 career was the most severely caught by the referee, and even some controversial whistle sounds appeared at this moment. To some extent, it has indeed become the main reason for the Mavericks to tie the game.

Usually I want to leave out the whistle, but it seems that we should talk about the whistle in this game. Of course, the Suns fans will definitely think that the whistle is not good for them in this game, and the Mavericks fans will think that they have never been favored by the league. Team, and CP3 was originally a player with a lot of petty moves. My feeling about the referee’s whistle has always been that as long as the referee’s presence can not be felt in the game, it is a good measure of whistle-blowing, and the referee It doesn’t matter whether the scale is loose or not, but if the scales on both sides are obviously different, or if the two sides have similar time or similar actions, there will be obvious deviations in the judgment, which is a very bad judgment.

For example, in the last 45.7 seconds of the first half of the fourth game today, Luka Doncic grabbed a rebound and landed. The Sun Mikal Bridges had almost no collision with Doncic after he had put his hands away, but after Doncic fell to the ground, the referee blew the whistle and called Bridges a foul. This action was about 43 seconds into the start of the third quarter. After Jae Crowder grabbed the rebound, Dwight Powell also had a body collision and Crowder fell to the ground. However, Crowder did not get the whistle, and this is the game’s big table time. within two minutes. In addition, CP3 jumped up in the air to grab a rebound before the end of the first half and the confrontation with Doncic was no different from Jalen Brunson flying into the restricted area to grab an offensive rebound with about 8 minutes and 33 seconds left in the third quarter. It was still CP3 who was called for a foul and Brunson retreated, all showing that the whistle sound was obviously beneficial to the Mavericks.

Not to mention that when there are 9 minutes and 32 seconds left in the third quarter, he is very used to CP3, which is used by most guards in the league. After dribbling the ball, he makes an emergency stop to let the players who are chasing behind hit him, commonly known as creating a fake car accident. If the referee didn’t give a defensive foul, this time he even called an offensive foul that rarely occurred in the regular season, and the biggest impact was that CP3 swallowed the fifth foul of the game.

That is to say, before the end of the first half, the inexplicable call made CP3 commit four fouls in the first half for the first time in his career, and he received the fifth foul within three and a half minutes of the third quarter. Such fouls are troublesome. Clearly a big disadvantage for the Suns, plus the obviously different scales on both sides, did affect the game.

When the Mavericks finally showed their team strength, the Suns lacked the help of the ace point guard. CP3’s contribution in the last two battles was minimal, so even if the Suns waited for Crowder to show off the attacking feel that completely disappeared in the first round, the young man still couldn’t fight the team. Niu contends. On the plus side, Crowder’s recovery is definitely helpful for the Suns, and in these two games, when the Suns played obviously badly and the Mavericks played well, there was still no too far of a score gap. But looking at the worst, the Mavericks did find the main offensive axis in the two games after returning home, mainly cutting in and passing out, creating a large number of three-point gaps in the bottom corner when creating a 5-out formation, and also effectively protecting Doncic from letting him on defense. Having been challenged by the Suns all the time, that means the Mavericks have indeed changed their offense and defense, and head coach Jason Kidd really thought of a way to adapt when faced with a disadvantage.

In addition, as I mentioned before the playoffs, the Suns did lead the league this season and set the best record in team history. There is no real overwhelming advantage, or absolute power that can pull a wave of winning streaks like the regular season. When Booker is absent in the first round, and when CP3 is in the downturn in the second round, the Suns will be in a hard fight because of this. The ceiling is not enough, even if you pass the next level, it is still not easy to play when moving forward to a higher-intensity game.

CP3’s two consecutive battles and Dorian Finney-Smith’s eight three-pointers in a single game can be regarded as exceptions to common sense, but he just happened, and the series entered a 2:2 draw. Under reasonable circumstances , you should expect CP3 to stop falling and rise, DFS is to feel cooler, if everything returns to the right track, the sun should still have its advantages, but if this unreasonable situation continues to occur, the current 2:2 battle situation shows that the Mavericks are not There is no chance of beating the sun.

There are three games left in the series, which is equivalent to two wins in three games. The Suns still have home field advantage. Let’s see what will happen.

Use our excellent ESPORTS betting in-depth betting guide, including all the most popular markets and where to find the best value

The MVP showdown ends, the advancing trump card and the disappearing high wall

The only MVP matchup, the Warriors finally defeated the gold nuggets to advance to the second round. The difference is obvious whether it is run in or not.

Voslot is one of the most trusted and longest-standing websites available in the gaming industry, with several awards to boot.