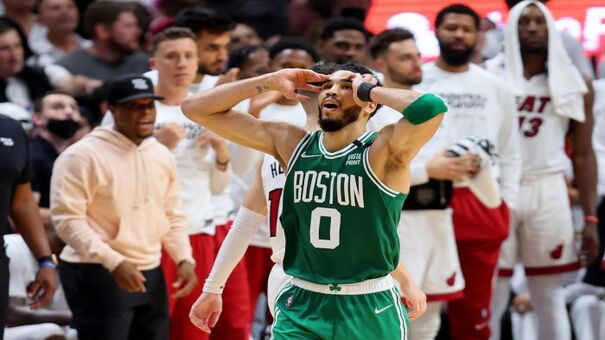 2022 Playoffs The Celtics shot only 13% in a single quarter! What defensive strategies did the Heat offer?

In this season’s regular season, the Celtics and the Heat ranked first and fourth in the league in terms of team defensive efficiency, respectively. In this game, both teams were better than teams in interceptions, number of hot pots, or number of team fouls. The average of their respective regular seasons is even more. Obviously, both armies intend to confront each other for the first time, so this series is set as a defensive battle, and fierce hand-to-hand confrontation should be expected.

Despite being behind by double digits in the first half, the Heat, who were waiting for work at home, still used their signature defense in the second half to play a 39-14 offensive in the third quarter, reversing the game in one fell swoop, and then did not let the Celtics catch up. The Heat took the lead in grabbing the victory in G1 of the Eastern Conference Championship.

The main reason why the Heat were able to reverse their opponents in the second half was the adjustment of their defensive strategy.

Unlike the previous round of the series, which used the outside line to smash the Bucks, G6 and G7 three-point shots accounted for more than half of the total number of shots. Celtic faced the Heat in this battle, and it was clear from the beginning of the game to attack the penalty area. Nearly half of the shots in the first two quarters were at the basket. Since the Heat mainly rely on the 2-3 zone defense, and the first two positions of the 2-3 are usually shorter guards, the Celtics let Jayson Tatum lead the offensive from the beginning of the game, taking advantage of his size to make a single-handed breakthrough , and then wait for the opportunity to attack the rim, or create space for teammates after attracting help defense, especially Robert Williams III repeatedly eat cake in the restricted area.

The Heat’s thorns in the first half were Tatum and Robert Williams III. The two scored 33 points together. In particular, Tatum made 8 of 9 shots in the penalty area in the first half, and sent out the team’s most 5 assists. Celtic took an 8-point lead at the end of the first two quarters.

However, the Heat made a change immediately in the third quarter. The sturdy P.J. Tucker was in charge of taking care of Tatum, constantly giving physical collisions, consuming his physical strength, and using more areas with man-marking strategies, making it difficult for Tatum to find the cutting gap. For example, in this wave of defense in the video below, Tatum used Double Drag wisely to avoid a head-to-head confrontation with Tucker, and at the same time created the opportunity to manage Adebayo, but the Heat immediately switched from man-marking to a zone defensive formation. When Tatum planned to break through from the middle, Max Strus on the weak side quickly closed the goal to steal the ball.

The Heat’s half-court team meeting also seemed to be very devoted to Tatum’s passing habits. Take Tatum’s mistake below as an example. Posseltik’s offensive range was quite large. Jaylen Brown, who was ready to catch the ball, even waited. Three strides away from the three-point line, he was still stole the ball by Jimmy Butler. The key was that Butler had caught Tatum’s passing inertia. He observed that Tatum had been watching Brown, who was not looking at the basket. When Tatum got the ball, Butler got it in one stride.

The Heat’s targeted defense effectively limited Tatum’s performance, allowing him to score only 8 points on 1-of-7 shooting in the second half, and he also made 6 turnovers, which made the Celtics often start the offensive before they started. The loss of the ball due to mistakes caused the team’s offense to crash and the rhythm was disrupted, especially the third quarter hit rate of 13.3%, which was the worst single quarter performance in team history in the past four seasons. The Heat relied on defense in the second half. Go-ahead score, and even lead as much as 20 points at one point.

The Heat’s best performance in this game is definitely not Jimmy Butler. He scored 41 points, 9 rebounds, 5 assists, 4 interceptions and 3 blocks with a shooting percentage of more than 60% in this game. This is his third time in the playoffs this season. The score broke through the 40 mark, leading the league.

It is worth noting that Butler only took two shots from beyond the 3-point line. Instead, he made opponents fouls by constantly hitting the basket. He stood at the free throw line as many as 18 times in this battle, and hit 17 of them. In fact, he was a master foul buy in the regular season, averaging 8.0 free throws per game, the fourth-highest in the league.

In addition, the Heat’s tactical design also effectively helped Butler buy offenders. This game used quite a lot of 1-2 P&R, that is, through the pick-and-roll between Butler and other guards, forcing the opponent to switch defenses, forming Butler’s ability to match the opponent’s shortness Defender’s chance.

Celtic scored 107 points and shot 45.6% in this game, which is almost the same as the average in this year’s playoffs, indicating that the two main players were absent due to injuries and did not cause much damage to the team’s offensive end. On the other hand, the defensive end , In the case of Smart’s high-free battle card, the Green Shirts not only lacked an available soldier to guard Butler, but also had more loopholes in the team’s defense, which may be a hidden worry for Celtic in the future.

In the face of the crisis of the main team missing, the Heat should be better

In this season’s regular season, the Celtics and the Heat ranked first and fourth in the league in terms of team defensive efficiency, respectively. In this game, both teams were better than teams in interceptions, number of hot pots, or number of team fouls. The average of their respective regular seasons is even more. Obviously, both armies intend to confront each other for the first time, so this series is set as a defensive battle, and fierce hand-to-hand confrontation should be expected.

Although both teams have their main players still on the injured list, according to the results of G1, the Heat have done a relatively good job in filling the vacancies. This may also be because Kyle Lowry has repeatedly stopped and stopped in the playoffs this year. The way to adapt has long been found, and that’s what the current Celtics have to learn.