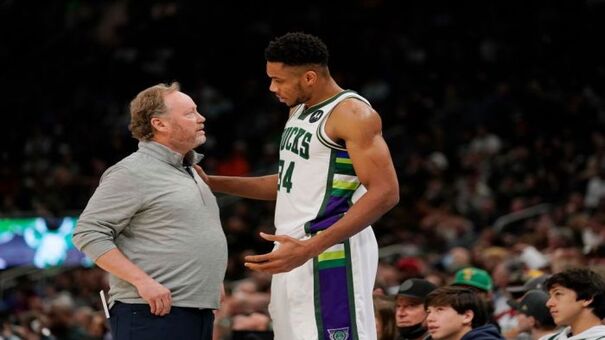 Budenholzer doesn’t seem to dare to step out of his comfort zone, preferring to trust the seasoned veterans Hill and Matthews, rather than trying to use the young Nwora to change the rhythm. Compared to Carter, who only joined in the middle of the season, Allen and Connaughton, who have been working together for a longer period of time, let him compare A sense of security.

Similar to the situation in the previous game, the G7 three-point shooting has once again become a key factor in determining the outcome. Celtic scored 22 three-pointers with a 40% shooting rate, while the Bucks only made 4 goals and made three-pointers. The rate is 12.1%, which is the lowest record for the Bucks this season, whether in the regular season or the playoffs. The main reason for the widening gap in the second half.

Although G6 was the perimeter that lost to the Celtics, the Bucks did not make much adjustments to the defensive strategy in this battle. At most, it was to increase the ratio of zone defense. However, the highest guiding principle of prioritizing the protection of the penalty area has not yet been Changed, and did not deliberately try to suppress the Celtics’ outside shots, especially the Bucks’ defensive pick-and-roll still adopts Drop. Therefore, Celtic still continued the offensive strategy of the previous game, increasing the rotation on the outside through the 5-out position, and pulling up directly on the outside through the pick-and-roll, constantly attacking the weaknesses that the Bucks couldn’t make up for.

The ratio of three-pointers and two-pointers shot by Celtic in the last game was nearly 1 to 1. In this game, it was even worse. Outside shots accounted for 62.5% of the total shots, and the firepower output of the Celtics was more average in this battle. Most of Celtic’s three-point goals in G6 were concentrated on Marcus Smart, Jaylen Brown and Jayson Tatum. After deducting the three of them, the team made 1 of 12 shots from outside; Shots, as many as 8 people left a hit record, and the multi-point blooming offensive made the bucks even more difficult to guard against.

Grant Williams scored 27 points and scored 7 3-pointers in this battle, all of which were his best performances since he entered the league. In fact, Grant Williams is a high-quality ambush shooter in the regular season. This season, the C&S three-point shooting rate is 41.5%, ranking second in the team. However, he has recently fallen into a low tide of blue shooting. In the past four games, he has made 2 of 14 outside shots. Fortunately, he was resurrected in time for the critical vocal battle.

Grant Williams’ contribution to the team is not just on the books, but more than a Box Score or a Play-By-Play record.

For example, during a defense in the third quarter, he accidentally stepped on the floor with sweat and slipped, but he immediately got up from the floor and quickly filled the penalty area to block Brook Lopez’s chance to catch the ball under the basket. Save the team two points; also, when the Bucks timeout period to discuss tactics, Grant Williams also put his head over to eavesdrop. These details all show that he did everything he could to contribute in every link in order to win.

Antetokounmpo’s attacking mode has been adjusted in this battle, reducing his own breakthrough with the ball from the perimeter, playing more as a cover for P&R or Handoff, and then waiting for opportunities to slide down to seek opportunities, especially in cooperation with Jrue Holiday’s pick-and-roll, Antetokounmpo hit 6 goals in the first two quarters Half of those were scored through Holiday’s pick-and-roll assists. Antetokounmpo scored 17 points with 60% shooting in the first half, which is quite efficient.

But Celtic made adjustments in the second half, switching more quickly against pick-and-rolls, and as soon as he caught the ball, Celtic’s defensive range immediately shrunk, as in the video below, Antetokounmpo holds the ball at the elbow The ball, Celtic’s defensive formation immediately retracted, and all five defenders stayed around the restricted area, making it difficult for Antetokounmpo to advance to the basket, and could only barely shoot near the free throw circle.

Celtic’s defensive response in the second half effectively limited Antetokounmpo, leaving him with 25% shooting in the second two quarters and only scoring 8 points, causing the Bucks’ offense to get into a bottleneck.

Antetokounmpo only took 7 shots at the basket in this game, a record low in the series, and 9 shots from the mid-to-long distance, which is a new high in the series. His hook shot is not as stable as in the previous games. To some extent, it shows that Antetokounmpo is a little tired after experiencing a whole series of fierce collisions and a lot of physical consumption.

All in all, Celtic used Al Horford, who has both size and experience, as the first line against Antetokounmpo, supplemented by the help of other teammates, and the defensive strategy was quite successful. Although this round allowed him to average 33.9 points per game, 4 points more than the proportion of the game, but the overall shooting percentage dropped by about 10%. The best part of Celtic’s work has been to reduce Antetokounmpo’s destructive power in the paint. Compared to the regular season, his cut percentage has dropped from 60.8% to 49.2%, and his 5-foot percentage from the rim has dropped from 74.4%. % dropped to 64.7%, and the penalty area hit rate from the exemption area to the free throw line was suppressed to a failing 29.3%.

The absence of the second leader, Khris Middleton, certainly had a major impact on the Bucks’ combat effectiveness, but the rigid scheduling of head coach Mike Budenholzer may also be a major reason for the team’s defeat.

Grayson Allen, George Hill, Wesley Matthews and Pat Connaughton combined for just 6 points on 2-for-17 shooting in key Game 7. In fact, excluding Brook Lopez and Jrue Holiday, the Bucks had the worst plus-minus in the series. Despite this, Budenholzer has never adjusted the scheduling pattern of the flank lineup. However, there are actually available soldiers such as Jevon Carter and Jordan Nwora on the bench. Ironically, Carter and Nwora are still in the top two in the series, but they were abandoned.

Budenholzer doesn’t seem to dare to step out of his comfort zone, preferring to trust the seasoned veterans Hill and Matthews, rather than trying to use the young Nwora to change the rhythm. Compared to Carter, who only joined in the middle of the season, Allen and Connaughton, who have been working together for a longer period of time, let him compare A sense of security.

In addition, Budenholzer is too stubborn in the defensive thinking of protecting the penalty area and fails to adapt. Although Lopez has a good rim protection ability, he cannot make up for the weakness of the perimeter, making him a big black hole in defense, leading to the Lopez series. The plus-minus -10.7 was the worst on the team. When Celtic’s G6 perimeter shot and G7 continued to feel hot, Budenholzer continued to keep him on the court without trying to speed up the small-ball lineup. Lopez even played more than 37 minutes in G7.

After the series ended, Antetokounmpo became the first player in history to score 200 points, 100 rebounds, and 50 assists in a single series. By contrast, the Celtics’ five starters averaged in double figures. It also shows that basketball is a team sport after all, and it is difficult for a superstar to cover the sky with one hand.

After the end of G7, which turned and stared, it also represented the end of this round of the series, and the two teams are about to move towards the next goal. The Celtics’ top priority is undoubtedly preparing for the Eastern Conference Championship, where they will meet again with their 2020 Eastern Conference opponents, the Heat. The Bucks have to think carefully about how to reorganize the player lineup, and even think about the issue of the coaching staff, and look forward to the next season.