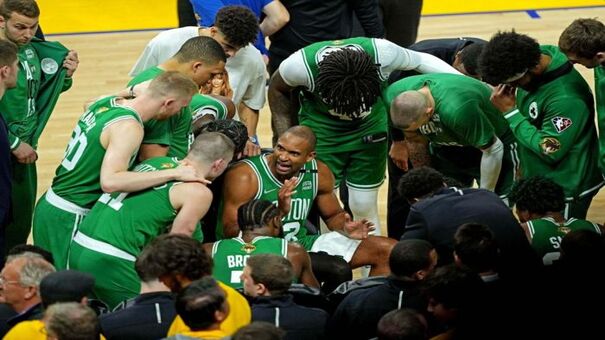 2022 Finals has only a 4% chance of successful reversal! How did the Celtics overcome a double-digit deficit to bring down the Warriors?

This year’s championship game G1, Celtic staged a surprise comeback show. In the third quarter, Celtic once trailed by as much as 15 points, but the Celtics made a strong counterattack in the fourth quarter, scoring 40 to 16 in a single quarter, but by 12 points, they got off to a good start at the Warriors’ home court. The Celtics also became the first team in NBA history to fall into a double-digit deficit after the first three quarters, but eventually won by a double-digit advantage.

At the decisive juncture in this game, the Warriors hardly used center Kevon Looney. Looney played less than 3 minutes in the fourth quarter. In the absence of a rim protector, the Warriors mainly adopted zone defense or zone man-to-man defensive strategies. Retracted to protect the penalty area, but the perimeter exposed more space.

The Celtics were originally a team that was quite capable of breaking the zone defense. In the Eastern Conference Championship, the Heat also preferred the zone defense. The Celtics used a cut pass with a skip pass to force the opponent to go out. Fight the defense, and then take the opportunity to attack closeout to create a shot or cut to attack the basket.

The Celtics basically defeated the Warriors in a similar pattern, especially in the middle of the fourth quarter. The Celtics placed a lineup of four small and one large, with Al Horford as the center, partnered with four front-back swingmen, and on the court. Almost all five players can throw, cut, and pass, so the effect of 5-out pass cutting can be maximized. In addition, Celtic has a very hot hand in this battle. The outside shot rate in the first three quarters is 41.4%. When the Warriors’ defensive range was reduced, Celtic’s three-pointers intensified, making 9 of 12 three-pointers in a single quarter, instantly pulling out a 23-4 wave.

Not only on the offensive end, Celtic can also effectively limit the Warriors’ performance on the defensive end. Celtic faced the Warriors’ smooth empty-handed moves in the first three quarters, but they suffered a lot. The defenders always had to run behind the Warriors’ shooters. However, Celtic turned passive into active in the fourth quarter. Since it is difficult to avoid being run out of space by the opponent through the screen, he will actively press the ball carrier who is responsible for the support.

How to compete with the opponent’s long formation? Looney may be the key factor

As mentioned earlier, the fundamental reason why the Warriors were shot by Celtic in the fourth quarter was probably because Looney was almost on the bench, so the Warriors’ defensive circle had to shrink inward. The importance of the Warriors may be beyond imagination.

As for the defensive end, Looney not only contributed 3 hot pots, but also performed well in single defense. Playing right against Luka Doncic in the previous round has proven to be an ineffective strategy to take advantage of misplaced opportunities for Looney. However, Celtic still didn’t give up in this battle. He frequently used P&R to force the Warriors to switch defenses, and rolled Looney one-on-one, but repeatedly returned empty-handed. In total, Looney played against Jayson Tatum, Marcus Smart and Jaylen Brown in this battle, and the total let the opponent down. 1 for 8.

Although the Warriors are known as the Death Five, the coaching staff may want to consider using Looney more in the face of a complete rotation of the Celtics in the restricted area.

After 21 points in the first quarter, why did Curry suddenly turn off in the next three quarters?

Stephen Curry’s performance in this battle was undulating like a roller coaster, and the start of the game was hot. In the first quarter, he made 6 of 8 three-pointers and scored 21 points. Since Michael Jordan in 1993, he has created a new high in a single quarter of the championship; the next three quarters But only another 13 points, and the overall shooting percentage is only 31.3%. The reason why Curry stalled in the latter part of the game may be related to Celtic’s defensive strategy adjustment.

In response to Curry’s pick-and-roll tactics, Celtic started the game with Drop Coverage, which is a strategy of not switching defenses in the face of screens, and retreating to protect the penalty area. And Celtic often chooses to retreat whether it is facing P&R, Handoff or the Warriors’ signature Split Action. Celtic’s defensive strategy is a relatively rare strategy against the Warriors, because when the elders retreat, the Warriors’ shooters can get outside space, which is undoubtedly digging their own grave, and Celtic really pays the price for it.

However, in the latter part of the game, Celtic switched to using the Switch or Show & Recover strategy to deal with pick-and-rolls. In short, the long man must stick to the outside to prevent Curry from pulling up directly on the outside after covering. For example, in the video below, despite being at a speed disadvantage, Robert Williams III pressed Curry from the 3-point line, and was unsurprisingly scored by Curry’s step-back jumper. However, it can be seen from this wave of defense that even if he will definitely lose points, Celtic would rather give up two points than let Curry easily shoot on the perimeter.

Also, because the Celtics have Horford and Robert Williams III at the back, the front-line defense can be more aggressive. Just like in the video below, facing the Warriors performing Split Action, Curry got an outside C&S opportunity at the top of the right arc, but Derrick White, who was chasing, immediately saved and even jumped up to prevent Curry from taking a shot, but Curry then cut in and was compensated A bit of Horford interference.

Although Curry was asked by Curry in the first quarter, Celtic’s subsequent application of strategies such as switching and putting off cuts did effectively limit his performance in the latter part of the game.

The blind spot of Tatum’s offense

The Celtics played an average team in this battle. Five players scored in double figures, including Jaylen Brown, Horford and White, who all broke the 20 mark. Only Jayson Tatum, who just won the Eastern Conference Championship MVP, did not perform well. With 13 assists, he set a new career high and set a record for the first board in a career championship since the legendary Jazz guard John Stockton in 1997. However, he only hit 3 goals in 17 shots in this battle.

One of Tatum’s big blind spots on offense in this game may be his over-attachment to Curry. Tatum has been using screens since the beginning of the game, forcing the Warriors to switch defenses and creating opportunities for misplaced RBIs for Curry, but the Warriors’ help defense is always so timely that Tatum’s singles are not effective. The following clip is an example. After Tatum slid down the pick-and-roll, he reached the low post position and was ready to use his body advantage to play Curry, but Andrew Wiggins had already prepared to help defend, so Tatum had to return the safety ball, Smart re-posted again, and Tatum faced assistance again. Defense, had to return the safety ball.

Although Smart finally successfully defused the bomb with high difficulty, this half-court positional battle did not achieve the transfer of the strong and weak sides at all, and the flow of ball power was completely stagnant. Tatum’s attack mode not only lowered the efficiency of the individual, but also hurt the team. A battle may need to adjust their own play.

According to historical data, the team that wins the G1 championship game in NBA history has a more than 70% chance of winning the championship. Outside of the shirt army, the Warriors are the only team that has not swallowed a losing streak in the playoffs this year.

However, the Warriors, who hope to regain a city in G2, may have to come up with more new tricks. In the second and fourth quarters when the Warriors were behind in a single quarter, when the opponents pulled out a wave, the coaching team requested two consecutive timeouts in a short period of time, but failed to stop the bleeding; the fourth quarter At the critical moment, he sacrificed the Five Small Deaths, but he was still attacked by the opponent 11 to 2. It can be seen that Celtic has thoroughly studied the strategy of the Warriors, so that he can repeatedly see tricks. How to correct the shortcomings of G1 remains to be considered by the Warriors.