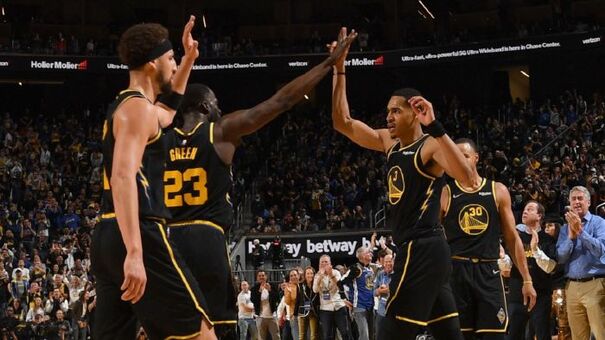 First-round playoffs recap – basketball is a team sport after all

When the final whistle sounded, the Warriors finally crossed the mountain of Nikola Jokic in the fifth game without any risk, and advanced to the second round of the playoffs again after two years.

When the final whistle sounded, the Warriors finally crossed the mountain of Nikola Jokic in the fifth game without any risk, and advanced to the second round of the playoffs again after two years.

After the indiscriminate bombing of the first two games, just when the author smelled a strong one-sided sweep, the gold nugget sitting on the MVP is not a fuel-efficient lamp after all. In the third game, he started to fight back, making use of Jokic and Cousins. Beating the Warriors’ penalty area violently, even though the Warriors narrowly won the third game, they fell in the fourth game.

Returning to the home game, the Warriors continued to be blown up in the penalty area as usual, which made them enter the fourth quarter with an 8-point deficit. Fortunately, in the end, under the leadership of Payton’s consecutive three-pointers and Curry’s stepping up to take over the game, the Warriors managed to send the nuggets home in five games.

The Warriors relied on a three-spray formation composed of Curry+Thompson+Poole in the first two games, and they took away the game with one wave in both games. However, rather than the indiscriminate bombardment of the three waves, I hope that everyone will pay attention to Draymond Green’s contribution.

You must know that the foundation of the Warriors’ first-rate is defense. If there is no defense, no matter how strong the offense is, it can only constitute a situation of mutual bombing, and there is no way to take away the game. When it comes to defense, the defensive performance of the Warriors with mouth green and without mouth green is really different, and Green is the only player in the Warriors team other than Curry who can quickly advance after grabbing a rebound, plus his solid Covering, and the tacit understanding with the waves cultivated for many years, this makes the three waves even more powerful.

In terms of stats, their plus-minus was 2.8 when Pure Three Waves played, but if Green was added, it would become 3.6.

If we want to talk about the actual game, I suggest everyone to review the last part of Game 4 after Draymond fouled and graduated. During that time, the Warriors’ offense was still very threatening. After all, Curry dominated the ball, but the defense couldn’t limit the gold nuggets. The end of the game becomes the mutual bombing mentioned above, and there is no effect of chasing points at all.

But I have to say, PTSD group I probably think they are too strong. Indeed, they have one of the best firepower on the offensive end, but on the defensive end, as long as there is a small communication error, it is basically a score, and this is why their plus-minus value is only 3.6.

For the rest of the playoffs, I think this combination can be used more for scoring moments. If the rest of the time is really going to be played, then I tend to replace the original P Poole with another P – Gary Payton ll. After all, Poole is actually injured, and his offensive desire in the next two games is not strong. If he can’t contribute on the offensive end, it would be better to replace him with GP2 and use the defense to bring the Spray Brothers a comfortable offensive rhythm.

In fact, after 82 regular games, anyone with a discerning eye can see that this year’s Warriors’ second team is not the same as last year’s. However, this season is different. Porter, Bjelica, Iguodala and others all have above-average conduction awareness. Therefore, the Warriors really have no gaps this season. The only difference is whether they can grasp it.

It’s the same in this series, because the Nuggets’ defensive strategy against Curry is that when someone picks and rolls for him, they hit Curry directly. And we all know what happens at this point—Curry shoves the ball to the roll man, creating a local 4-on-3 advantage. Either the guy at the Dunker Spot will have a gap, or the corner shooter will have a gap. The gold nuggets that focus on consolidating the penalty area are generally placed as corner shooters, that is, Porter and GP2 are neutral.

But Porter’s 3-point shooting was only 15.6 percent in this series, which left the Warriors suddenly missing a reliable offensive point. As for GP2, although he shoots a terrible 75% hit rate, this kind of cheating data is basically 99% unsustainable… But fortunately, he has confidence in the perimeter in these five games, otherwise, can the Warriors in the fifth game be able to maintain? It’s hard to tell if it’s a win.

As for the others…Bjelica and Iguodala didn’t even dare to vote, so it’s no wonder that Kerr dropped Bjelica in Game 5 and replaced him with rookie Kuminga.

I didn’t plan to see Kuminga in the non-garbage playoff time. After all, there is no room for mistakes in the playoffs. If the hard work comes up, the Warriors may lose the game directly. But the sudden change to Kuminga in the second quarter of the fourth round really surprised and delighted me.

The surprise is that I am afraid that he will mess up and cause the team to lose the game; the happy thing is that I like this player very much, and it is also good for him to have some playoff experience in the future.

Unexpectedly, his performance in the whole game can be said to be remarkable, and he also successfully won the playing time of Game 5 for himself.

But to be honest, I don’t really expect Kuminga to save the Warriors’ second unit, but as long as I can see him on the court to accumulate experience, not make too many mistakes, or even make a few dunks every now and then, I’m satisfied. .

Although the results of the regular season match between the two sides is that the gold nugget leads with 3 wins and 1 loss, when the series starts, the lineup of the two teams is spread out, and the strengths and weaknesses of the two sides are analyzed in detail, and a cruel fact will be found – the gold nugget is in addition to the penalty area. , with few other advantages!

Basically, Jokic starts and Cousins ​​replaces the insider, no matter which team in the league is the gold nugget’s biggest advantage, and there is good news for them, that is, the penalty area happens to be the Warriors’ weakness. Therefore, How the Warriors will limit Jokic is the most popular topic of discussion from beginning to end.

The results of the game proved that the Warriors basically focused on not double-teaming in the face of Jokic, preferring to let him score singles by himself, but also to prevent him from connecting the whole team. And the players in charge of Jokic are Looney and Green.

I don’t think I need to say more about the result, right? ! Looney has only been blown up. In the entire series, Jokic shot 62.5% from the field and scored 38 points on his head, and this is only the data of 17 minutes of matchup! In other words, Jokic can score 2.2 points per minute off Looney. However, Looney’s responsibility is not to lock the Jokic. His biggest function is to consume physical energy, and let Green deal with Jokic at the critical moment.

And Green didn’t lose his trust. When he played against Jokic, the latter’s hit rate dropped to 50.9%. If calculated by DIFF, Green can reduce Jokic’s hit rate by 6.6% compared to his average in this series!

However, in addition to praising mouth green defense, I still have to give Jokic full respect.

In the entire series, I can only describe Jokic as omnipresent. Whether it is coup, shooting, cutting, high post, low post, in short, he can do almost all kinds of moves. Even if the Warriors press Draymond Green, he still can’t stop him from averaging 30+ per game.

In the fifth battle, the right leg was injured, and I really couldn’t help being fancied by him… Looking forward to their comeback next year when they welcome back the injured soldiers!

Summarize：Two fists beat four palms; basketball is a team game after all

I really can’t think of a better comment than this small standard. In the battle report of the fan club, I mention Jokic’s solitary palm in almost every article… No way, I want to avenge him when I see it!

With 31 points, 13.8 assists, 5.8 rebounds, and a shooting percentage of 57.5%, I really can’t ask him to do more! But even if he made such a dominant result, he still lost to the Warriors’ multi-point bloom, three waves averaged 20+ per game, and even Wiggins only needed 10.2 shots to help the team win. I think Jokic should have deeply understood what it means to be alone after facing off against the powerhouses in the playoffs for two consecutive years…

Take a look at the picture below, I believe you can feel how helpless Jokic is:

The Warriors are a championship team

All we can do is do our best.

Fortunately, Jokic’s mentality is quite positive, and he is very personable. He is not arrogant in victory and not discouraged in defeat. The winning warriors continue to cheer for the championship; while the losing gold nugget welcomes Murray and others back next year, I believe it will definitely be better!

I really can’t choose between these two.

In terms of book results, there is no doubt that Curry has the upper hand. In the series, he averaged 28 points, 3.4 rebounds, 5.4 assists and 1.6 steals, completely surpassing Draymond’s 9.6 points, 5.4 rebounds and 7.4 assists. The Warriors can win.

This can be seen from on/off:

Plus-minus when Stephen Curry comes off the court: -3

Plus-minus when Draymond Green comes off: -7

The on/off of these two is the best top two on the team, which shows that they are the most reliant stars of the Warriors, but it is obvious that Green is a bit higher than Curry. This point goes back to what I said earlier. The Warriors’ signature wave still has to start with defense. Without Draymond, the Warriors can really only do mutual bombing under the leadership of Curry.

If I really had to choose between the two, I would still choose Curry. After all, Curry is slightly better than Curry in terms of performance at critical moments, team momentum, and stats, but if it is Draymond Green, I have no opinion.

Is teamqueen casino a scam?

What is the easiest online entertainment game to win?

Why go to a casino if the casino always wins?

Well, maybe in some cases, the casino doesn’t always win. Hmm… not quite.

Key things to look for in a safe online entertainment city

Key things to look for in a safe online entertainment city

How to play slots PG and Slotxo in online casinos

How to play slots PG and Slotxo in online casinos

How to Play Medium and Mini Baccarat: The Complete Guide

How to Play Medium and Mini Baccarat: The Complete Guide