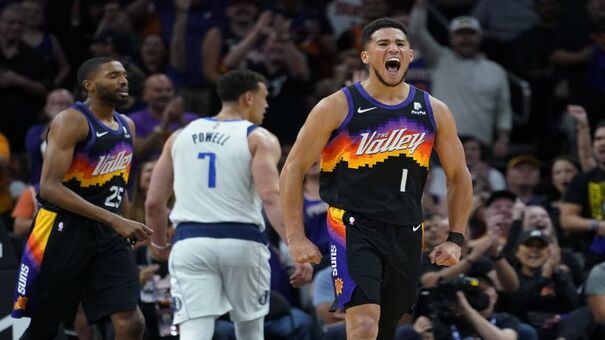 The gap between the 2022 playoffs Suns and Mavericks

The fourth quarter consisted of Spencer Dinwiddie, Jalen Brunson, and the headman Luka Doncic, who had been cold for the whole game, in the last half of the quarter, making the game seem a little suspenseful in the last minute. However, from the third quarter to the first half of the fourth quarter, including the bench Center JaVale McGee can steal Doncic’s ball one-on-one when he is called by Doncic, and then dunk with the ball one-on-one. You can see that this game is actually not too difficult for the Suns to play, at least the same as the first round against the Pelicans. Fighting is not as hard as it is.

In the end, after the Mavericks launched a chasing offensive, several waves of pressure and defense, but also gave the Suns a few free throws and made all the shots, in the end, it was just what numbers would appear on the scoreboard. The Suns won 121:114, and the series was won The next win is also the sixth consecutive series that the Suns have started with a victory since they returned to the playoffs last season.

The Suns pulled out an 18-6 lead at the beginning of the game, and they were full of fire in the first half. The main reason for the hard battle against the Pelicans in the first round was that the three-pointer was not opened, and this did not happen. In the first half, the Suns made 6 of 12 three-pointers. The team’s shooting percentage was 0.636, far better than the Mavericks’ 0.419. The Mavericks tried to catch up with 9-of-21 three-pointers. Although the game was not pulled away by the Suns, it was a 13-point difference, and the Suns’ top two They scored 35 and 34 points respectively in the quarter, showing that the offense was extremely smooth. Except for Cameron Payne, who had a poor offensive touch today, when Chris Paul was resting off the court, the Mavericks chased some points because of the disadvantage on both ends of the offensive and defensive ends. The Suns did not meet in the first half. to what obstacles.

Entering the third quarter, the Mavericks maintained a 10-point deficit, but starting from the defensive lock Mikal Bridges staring at Doncic on the first line, the Mavericks hardly scored many goals after easily creating a gap, Dinwiddie It wasn’t until the last 1 minute and 48 seconds of the third quarter that he scored the first point of the game. In the first round, Brunson, who scored 27.8 points per game against the Jazz, only scored 3 points in the first half, and the third quarter was also very hard. Another goal and 2 points, even if Doncic scored 26 points in the first half, and Maxi Kleber made 5 3-pointers to make up 16 points, it still shows that the defense of the Suns made the Mavericks play very well in the majority of the game. strenuous.

In the end, the game was only won by 7 points, but it is obvious that facing the Suns, the Mavericks are no better than the Jazz in the first round. The Suns’ attacking end CP3 and Devin Booker, who has just returned from a hamstring injury, are only an understatement, but Deandre Ayton had 19 points in the first half, 25 points and 8 rebounds in the game, and even if he didn’t make the last five shots, he still had a 0.600 shooting percentage, plus Bridges, Jae Crowder, Cameron Johnson all had double digits Contribution, the three made 7 three-pointers smoothly, which was enough for the Suns to win.

Doncic scored a career-high 45 points in the playoffs, plus 12 rebounds and 8 assists, but after playing for more than 44 minutes, he was often tired in the fourth quarter, and his attacks were not as good as the first half, except In addition to Doncic, Kleber also had 19 points, Dorian Finney-Smith had 15 points and 6 rebounds, and Brunson, who contributed 8 points in the fourth quarter, scored 13 points, the first time he scored less than 20 points in a single game in the playoffs this season.

In addition to the Mavericks’ loss, Doncic is also worried about. First, he really saw his fatigue at the end of this battle. Second, Doncic also suffered a hamstring injury in the last battle of the example game and missed three games in the first round. After returning to the team, in the fourth quarter, except for Kleber’s first-time dunk in the fourth quarter, he fell to the ground because he didn’t grasp the basket. The hind legs and footsteps are a little staggering, whether it’s simply due to fatigue, cramps, or really related to previous injuries, it’s worth the Mavericks to be more careful.

The Suns took the lead all the way, with a 51:36 advantage in rebounding. Booker’s 8 assists out of the team’s 27 assists were the most, while CP3 had only 3 times, less than Bridges (4 times) and Payne (5 times). When Crowder When he was taken off the court ahead of time for his fourth foul in the third quarter, Johnson immediately scored two three-pointers. It can be seen that the Suns’ offense played smoothly in this battle, and they didn’t have to resort to CP3 twice in the first round to show at critical moments. Point God’s dominant trick can already defeat the enemy and win, at least as far as this battle is concerned, the sun is obviously playing easier than the first round.

Ayton seldom stayed on the court in the fourth quarter. One was that he had a bigger lead at the beginning, allowing McGee to take time off the bench. The other was that the Mavericks used five small lineups to chase three-pointers, and the Suns also played Johnson and Bridges. , Crowder’s response in the frontcourt, but when interviewed after the game, he said calmly: I am very happy for the performance of the whole team. Everyone played a very good ball. It is very important to win the first victory, but it is only the first victory. We will only be happy for one day, and there is still a long way to go.

The Suns’ strategy of not double-teaming Doncic and blocking other Mavs players in this battle is obviously successful, but with the ability of Mavericks head coach Jason Kidd this season, it is very likely to change the way in the next game, but the Suns are currently dominant, and the team is offensive and defensive. They all showed outstanding performances in the first game. Before the Mavericks can really deal with it, the Suns will have a better chance to pass this level.