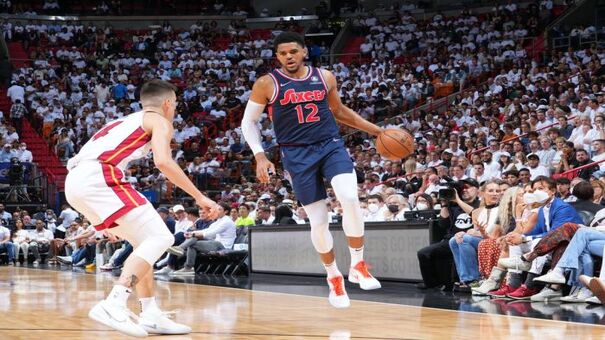 The two games in South Beach came to an end today, and the result was an unexpected 2-0 lead by the Heat. The scores, however, were probably all close to the bottom, and it seemed that the Sixers were powerless throughout the game. But if you look closely at the content of the game, it is not impossible for Philadelphia to win. The author will discuss the direction of the next series from a few points of observation and where the two teams can relate:

The two games in South Beach came to an end today, and the result was an unexpected 2-0 lead by the Heat. The scores, however, were probably all close to the bottom, and it seemed that the Sixers were powerless throughout the game. But if you look closely at the content of the game, it is not impossible for Philadelphia to win. The author will discuss the direction of the next series from a few points of observation and where the two teams can relate:

1.Correcting the three-pointedness of regression

Of course, the Heat’s aggressive Close Out and Maxey’s many unreasonable pull ups may have distorted the pure open shooting data, but at least the latter’s shots had a high hit rate in the previous round.

A large part of the three-point miss is blamed on Niang and Green. Although the former couldn’t hide his disappointment in the post-match interview, after all, he was afflicted with knee injuries and took on more responsibilities on the defensive end that usually did not belong to him. The downturn on the offensive end was reasonable. As for the Templar shooter who forgot his skill pack in Toronto, he’ll just have to wait for him to get back to his level.

At this moment when Embiid has not yet announced whether the next battle will return, even if the emperor is about to participate in the battle, the grasp of the gap is a crucial point. After all, the way to destroy the zone defense is not only to enter the position where the defense is unclear, but also the corner three-pointer is often a gap that will appear after the rotation. Now that Harden can no longer maintain his attacking ability, whether he can maximize his transmission ability will depend on the role players. Rivers have tried to use Korkmaz to change their luck, and the latter’s air-cut awareness and 3-point sense really make Philadelphia have a different look on the offensive end. But only by consistently getting the ball into the rim will you have the chance to earn playing time.

Although Laohe still started with DAJ out of inexplicable persistence, from the changes in his playing time in the two wars, it can still be seen that Laohe compromised the situation of the battle-it would be better to let Jordan, who is tall, continue to lose points. Come up with small lineups to open up space. On the offensive end, it can make the cutting path more empty, and on the defensive end, it can also avoid the perimeter gap exposed by Drop in the way of zone defense.

Whether it’s Paul Reed, or even Tobias Harris, there’s a case for center. The two gave the Sixers a better perimeter ability, and made up for Harden’s difficulty with off-ball defense. In the first game, the regional zone defense with a small lineup was indeed effective, so that the first wave of the Heat’s offense could not get what they wanted. However, the lack of defensive rebound protection has become the key to the Sixers’ inability to convert the opponent’s sluggish shooting percentage into a lead. The first game was like this, and the second game was gradually reflected in the second half.

This is also Philadelphia’s biggest hurdle when it comes to small-ball tactics: stamina. Reed’s low stature makes him prone to fouls because of rim protection, and his inexperience has made him pay a lot of tuition after switching, allowing him to stay on the court relatively little time. From the first round, Harris, who has fought against the Tyrannosaurus front line by one person, as a center not only has to guard from No. 1 to No. 5 of the Heat, but also needs to collide with Adebayo, Dedmon and others on the off-ball defense. consumption is evident. Not to mention the offensive arrow to be Hunting Herro on the offensive end. The situation where the candles were burning at both ends made it impossible for him to perform well in the second half.

The physical disparity is rooted in the lack of depth in the lineup. On Philly’s side, Thybulle, Niang, Harden’s flaws on one end of the court limit them to 0.5 players, and Jordan’s degradation can only be counted as 0.5. This makes the appearance of Philadelphia’s nine-person rotation, but in fact only seven people’s combat strength. In contrast, the Heat’s nine rotations can make a certain contribution on both ends of the court, and an active and effective team defense can also avoid the possibility of being hit to a certain extent. Non-stop physical contact on the defensive end consumes the ability of Philly players, and other players can take the baton after exhaustion. It is really not easy to have the luxury of lineup depth.

3.How to block Herro?

Compared with the occasional slump in the last round of battles, this season’s Sixth Man of the Year winner can be said to have no mercy against the Sixers. The average of 21.5 points and more than 50% hit rate in the two wars are deadly weapons for Philadelphia. You know, Herro’s biggest improvement this season is his ability to read defenses and use screens. He can judge the coming of the second-line defense and play pick-and-roll with the long man at the top of the arc. If the first-line defender has plans to pass the screen, and the second-line defense is waiting for him after the screen, he will refuse. Screening and cutting in; if the second-line defense is still calm, he will use the screen many times to involve the first-line defender, and then find his comfortable shooting position. From the point of contact to the point of possession, Herro’s growth is really visible.

To block Herro, Philly will have to find a way to force him off the ball from the serve. After all, Herro is a more terrifying weapon on the ball end than off the ball. Maybe Thybulle must consider a more aggressive full-court defense. And if Herro can really launch a pick-and-roll from the top of the arc with the ball, the second-line defender should pay attention to switching defenses and drive him to the bottom line to attack, giving his teammates the opportunity to rotate later. Although this strategy may lead to gaps in Tucker and Adebayo who are serving as cover, after all, Herro’s field of vision is still relatively limited, and it is not easy to accurately send the ball to the Roll In leader.

Harden, 32, is long gone, but he can still help the team with his vision. Before the King of Philadelphia returned to the throne, even if there were no more moves and a lack of troops, he still had to find a way to take the initiative at home and fight for the chance of the fifth battle. Show off your concentration to face the sixth battle of the Tyrannosaurus!

At the moment when there is no turning back.